Over the past decades, Europe has achieved substantial improvements in fire safety thanks to the continuous adjustment and implementation of fire safety strategies. As a result of comprehensive approaches, fire fatalities have fallen by 65% in Europe over the last 30 years.

EACH FIRE VICTIM IS ONE TOO MANY

However, more needs to be done as fire safety in buildings remains a major societal issue. According to statistics, it is estimated that, in Europe, around 5000 people a year are killed due to building fires.

All actors involved should intensify their efforts in finding and implementing effective solutions.

According to the subsidiarity principle, fire safety is a national competence, but the European Union also has a role to play. Most of the fatalities from fire happen in residential fires that are preventable.

To achieve this, fire safety in buildings requires a holistic approach from preventing the start of any fire to containing and extinguishing it.

In this guide, we present the seven layers of fire safety that must be considered to protect citizens and buildings, and how each of these can be improved. 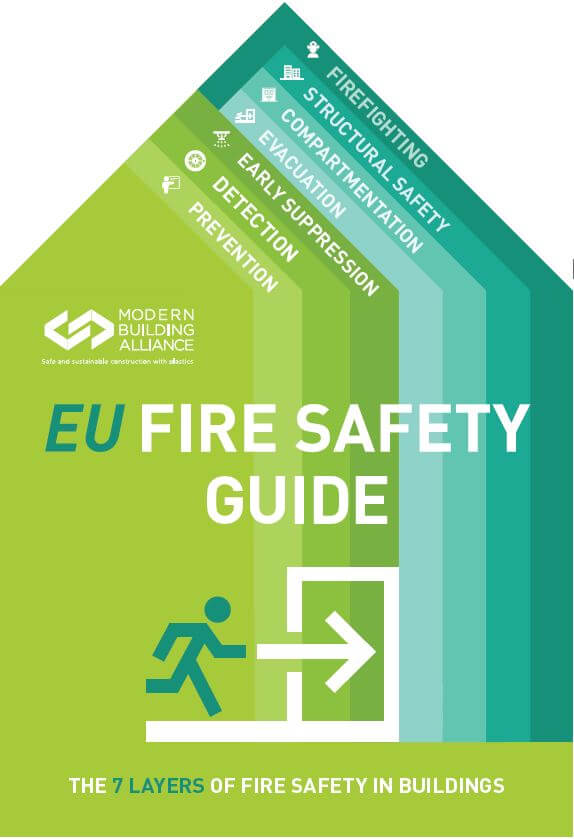 The 7 layers of Fire Safety in Buildings

First, the start of a fire should be prevented. Understanding the causes and risk factors of this is the starting point for informing effective prevention efforts via technical and human related measures.

The main causes of accidental fires in Europe are smoking, electrical faults, cooking and carelessness with sources of ignition, such as matches or candles.

Most fatal residential fires ignite upholstered furniture, beds, mattresses and textiles, including clothes, and start in the living room, followed by the bedroom and kitchen*.

Construction products which might be exposed to an initiating fire are subject to “reaction to fire” performance requirements based on the Euroclass system.

*In 2018 the European Fire Safety Alliance presented a first report on fatal residential fires in Europe.

Estonia updated its approach to fire safety in 2006 to include systematic prevention. Since then, the number of fire accidents has seen a three-fold reduction. Finland organises a Fire Safety Week each year, including a ‘Day at the Fire Station’ family event, where important fire safety skills can be learned.

When a fire occurs despite prevention measures, it is important to detect it as early as possible to give building occupants sufficient time to react, including safe evacuation and early fire extinction.

Smoke will not wake you up in time in case of a fire at night, only smoke alarms and detectors will. These are vital in allowing timely evacuation.

The installation of smoke alarms inside each bedroom, outside each sleeping area and on every level of the entire residential building is recommended.

In larger buildings, alarms must ideally be interconnected to alert all building occupants.

*The type and extent of requirements varies across countries and regions.

When a fire occurs, it can be stopped within the first minutes by a manual extinguisher or by automatic sprinklers. Sprinklers are activated automatically by heat and only at the place where the fire occurs.

96% of fires in sprinkler-protected buildings are controlled or extinguished by the system on the premises.

Evidence shows that while sprinklers are primarily intended to contain or control fires, they can also be instrumental in saving the lives of people in the room of the fire’s origin.

Automatic Fire Suppression Systems are required in all residential homes in Wales and in residential buildings above two storeys in Norway. Different types of sprinklers are available, including portable and temporary units that can be installed without the need for pipework to be constructed, and which can, for example, be useful for people staying at home and who are less able to evacuate, such as elderly or disabled people.

If a fire starts and cannot be stopped immediately, safe evacuation of a building’s occupants is the first priority. Having access to good escape routes which are well-lit, short and smoke-free, and knowing about them, is essential. Therefore, escape routes should be included in building design as part of a holistic approach to fire safety.

The target time for evacuating a building in case of fire varies depending on the size of the building.

Blocked or cluttered escape routes can be a major issue.

Slovenia developed a campaign to give citizens information and recommendations on timely evacuation planning in case of fire.

In many building regulations, methods of keeping escape ways smoke free are defined. This can be achieved through smoke release or smoke extraction, as well as compartmentation.

Fire compartmentation will ensure a fire and its smoke are contained in the compartment of origin and do not spread to other rooms. It also aims to protect safe escape ways such as corridors and stairs.

Physical barriers will achieve compartmentation, and these include fire walls and floors, fire doors and the fireproof sealing of joints and penetrations.

In case of a rapid fire spread on a façade, the compartmentation strategy might be jeopardised.

The EU’s Construction Products Regulation (CPR) enables a common test and classification methodology for construction products regarding their reaction or resistance to fire, and for communicating their performance.

It allows Member States to define national performance requirements for specific applications, including for the purpose of compartmentation.

Several countries (the United Kingdom, Ireland, Germany, France, Sweden, Norway, Denmark, Austria, Poland, the Czech Republic and Slovakia) use large scale tests for façade systems, which is the best way to ensure that a façade system will not jeopardise the compartmentation strategy.

The Frankfurt Fire Brigade organises the regular inspection of high-rise buildings Fire Safety in High- and Medium-rise Buildings where it checks that compartmentation is not compromised by faults in fire doors or unsealed penetrations through walls.

In case of a large fire, the structural safety of the building needs to be ensured so that it will not collapse on occupants or firefighters.

Structural fire testing relies on the use of the standard fire resistance test (i.e. furnace test) on structural elements and assemblies.

Fire safe structures are not only a matter of material combustibility.

Current knowledge allows for the design of fire safe structures in concrete and steel, as well as in wood, composites and elements with combustible products.

The Eurocodes – a set of European standards for the design of buildings and other civil engineering works – are a reference in, and outside, Europe for the design of structures that consider fire and seismic safety.

When a fire occurs, the fire services should arrive as soon as possible to evacuate the occupants, fight the fire and prevent any further spread.

112 is the European emergency number available all over Europe. It is celebrated annually on 11 February through the European 112 Day to raise awareness about its advantages and the role of emergency services.

In Germany, a specific guideline for high-rise apartment buildings requests building design to integrate specific firefighting facilities which allow for a faster reaction, such as a specific water supply or firefighting elevators.

All references and additional information