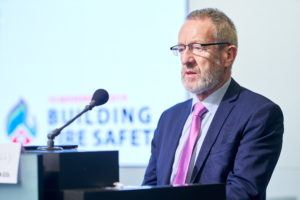 Member of the European Parliament

In 2015, Seán led discussions in the ITRE committee as a rapporteur ahead of the Paris Climate Agreement and as a result represented the European Parliament at the upcoming COP21 in December 2015 at which the historic global agreement was reached. He would also go on to represent Parliament at subsequent UNFCCC Climate Conferences in Marrakech (2016) and Katowice (2018).

In 2017, Seán was appointed EPP lead negotiator for the post-2020 Renewable Energy Directive (REDII), and also for the ITRE Committee Opinion on the Effort Sharing Regulation. Both files are crucial elements of the EU 2030 climate and energy framework. Work on the REDII continued in 2018 as Parliament secured the ambitious target of 32% for Renewable Energy by 2030, following intense negotiations with Council.

2018 also saw Seán lead Parliamentary discussions on the new InvestEU Programme, the EU's new €650 billion investment plan that will operate from 2021-2027; negotiations with Council are underway and the programme is expected to open up significant new investment opportunities for Irish businesses.