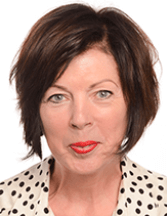 Member of the European Parliament

Theresa Griffin joined the European Parliament in May 2014, representing the North-West England as top candidate.

Theresa is a full member of the Committee on Industry, Research and Energy and is Chair of the European Parliamentary Labour Party. She is currently the President of EUFORES and has been tackling energy poverty and campaigning for a ‘just transition’ to a carbon neutral Energy Union since joining the Parliament. Mrs Griffin has since gone on to win the Energy MEP of the Year in 2017, testament to her dedication in this field.

From fuel poverty, regional funding, health research and the promotion of the digital single market, her commitment to equality is shown throughout her work in the European Parliament. She is also actively involved in the Parliament’s Intergroups on LGBTI, Trade Unions and Children’s Rights, to name a few.

Born to Irish immigrant parents, she grew up in Coventry and has a First-Class BA Honours and a Master’s Degree from Lancaster University.